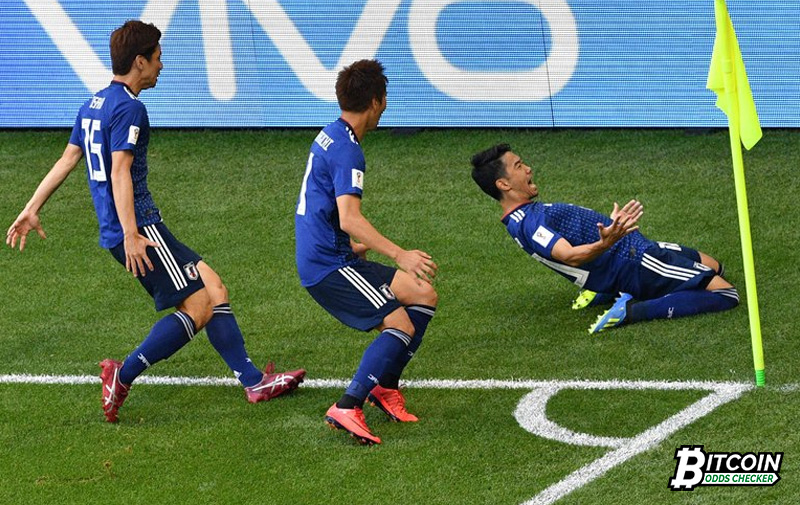 Japan capitalized from Colombia’s substandard start to the World Cup as they sealed a victory against the 10-man squad in their Group H opener match, despite James Rodriguez called into action in the 59th minute.

Colombia conceded an early penalty and lost Carlos Sanchez for blocking Shinji Kagawa’s shot at goal with his hand. This was the second fastest red card in World Cup history, which was given just 4 minutes into the game, leaving Colombia’s defense line more vulnerable to Japan’s offense. Shinji Kagawa converted the spot-kick to give the Blue Samurai’s an early lead.

Japan had more chances to stretch the lead succeeding the penalty kick, but Takashi Inui and Yuya Osako failed to profit from the opportunities.

A questionable call from the referee punished Japan when Juan Quintero fired a low free-kick under the jumping wall. Goalkeeper Eiji Kawashima was too late to parry the shot out as the ball just cleared the line upon reaching it.

Star player James Rodriguez checked in on the second half of the match, not having deemed fit enough to be part of the starting 11. However, he barely made an impact after Japan had settled and dominated possession for the rest of the match.

The only good look Colombia had on goal was after Rodriguez’s rocket of a shot was deflected over the bar thanks to exceptional defending by the Blue Samurai.

This was Japan’s first World Cup win on European soil, and the first time the had beaten a team from South America at the tournament. Surely, this game will be talked about for years and marks a historical moment for the Japanese football team.

Meanwhile, Colombia displayed underwhelming performance having reached the quarter-finals in 2014. This leaves them with two crucial games they have to win against Poland and Senegal.

Some say that this is the World Cup of penalties with the introduction of VAR (Virtual Assistant Referee), but 2018’s installment is also full of upsets, the first being Argentina’s stalemate with Iceland. This was followed by Mexico’s 1-0 win against Germany, tournament favorite Brazil draw with Switzerland and a shocking 2-1 Japan victory over Colombia.

The unexpected results continue in Group H when Senegal came away with a 2-1 victory against Poland.

It took just 37 minutes for the scoreline to open, coming on an own goal from Polish defender Thiago Cionek, who accidentally deflected Idrissa Gana’s shot into his own net.

Senegal then doubled its lead to 2-0 on a bizarre goal from M’Baye Niang in the 60th minute in which he came onto the field and slipped behind the defense after being waved back on by the official. Niang, who was out of play initially due to an injury, chased down a loose ball and an off-guard defender to score a goal. But then again, this raised concerns that made fans wonder if the referee should have allowed Niang back on at that moment.

Grzegorz Krychowiak put Poland on the score sheet four minutes from time with a header, and that was the last goal of the match.

This is only Senegal’s second appearance at the World Cup, but they make headway by pulling off another astonishing win. The team first made the headlines in 2002 by defeating then-champions France in the opening match of the group stage and advancing to the round of 16.

Ultimately, the first round came out with unpredictable results, and that is the magic of the World Cup. Expect more action, drama, and unforgettable moments coming your way as round 2 kicks off.

Looking to bet on Round 2 matches? Find the latest Bitcoin soccer odds here.