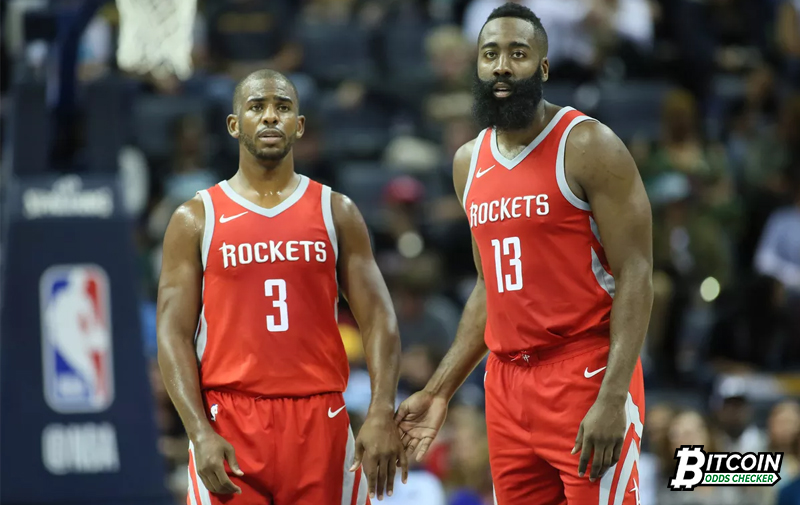 The All-Star weekend finished its festivities where Devin Booker stole the show with his 28-point performance in the three-point shooting contest, the dunk contest turned into a time for a tribute to past dunkers, and the skills challenge was surprisingly won by another big man.

However, we’re here to talk Bitcoin basketball odds and futures for the NBA Champion moved from opening day to the present as the season is about to reach halfway. Like the opening day, the Warriors and Cavs’ fourth consecutive finals is what many predicted early in the season, which now looks bleak after their early-season slumps. With that though, the Warriors have cemented themselves as the favorites to hoist the Larry O’Brien trophy come June with -192 odds, from +100 odds in opening day, back in October. But, the surging Houston Rockets became an instant threat to the Warriors’ dynasty with +533 odds. It turns out the backcourt tandem of Chris Paul and James Harden ended up working perfectly as many had different thoughts against them.

If you’re looking for a long-shot wager, the Timberwolves (+2,900) are in serious contention, as they are in the fourth spot in the West, just a few games behind the Spurs. The retooled Wolves, with the addition of Jimmy Butler, have gone early struggles too, most especially in defense. But, the last half of the season looks bright with this team, as they attempt to secure a sure spot in the playoffs, after missing the postseason a lot in the past couple of seasons. In which, their last playoff appearance was the 2003-2004 season.

Moreover, the much surprising Raptors, a team that succumbed to mediocrity much of the past seasons turned into a threat in the league. Toronto secured the first spot in the East before the All-Star break and their odds shifted from a +4,000 to +1,400 odds. The Raptors have one of the deepest benches in the league and the backcourt all-star pair of Kyle Lowry and DeMar DeRozan, hopefully, leapfrogs the team past the second-round and even more this coming playoff round.

It’s still not too late to place futures bets on the NBA Champion. At top Bitcoin sportsbooks, notably NitrogenSports, the odds prove to be competitive and offers a plethora of profit-making opportunities.