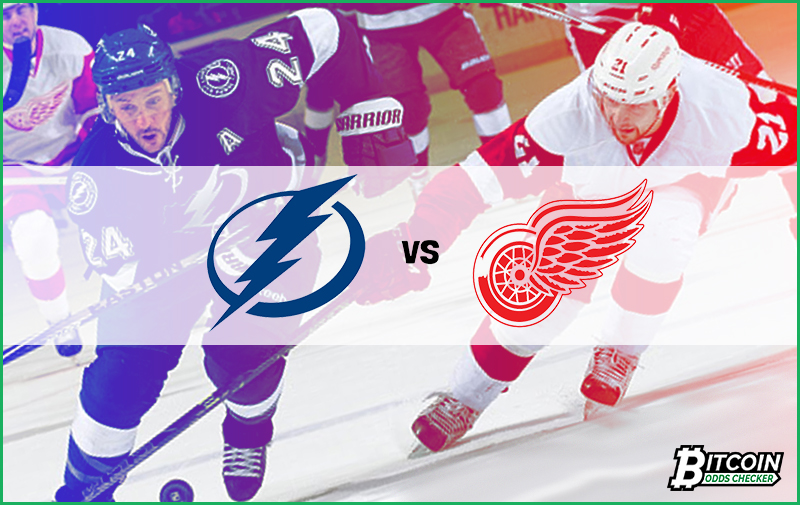 In a hockey match at Little Caesars Arena on Monday against the Detroit Red Wings, Nikita Kucherov led Tampa Bay Lightning to victory, scoring two points out of three while Tyler Johnson scored a point during the first period. Justin Abdelkader and Mike Green of Detroit both scored during the second period but in the third period, Kucherov made his second goal which makes it his seventh goal of the season. While this is an exciting time for the NHL world, it also added thrill to the Bitcoin NHL betting corner.

Kucherov never failed to score exactly one goal in the first five games this season, which he added two more in the game against Red Wings. He is now second in the League in goals, just behind Alex Ovechkin of the Washington Capitals with two points. Kucherov made history for being the fourth NHL player in 30 years to score in all his team’s first six games, following the footsteps of Mario Lemieux (Pittsburgh Penguins, 1992), Steve Yzerman (Red Wings, 1988), and Keith Tkachuk (St. Louis Blues, 2008).

Kucherov and Johnson were not the only ones who made the victory possible. Steven Stamkos had an assist on each of Kucherov’s goals. Stamkos admittedly said that they were just trying to get the puck to Kucherov as much as they could, believing in the many ways Kucherov could score. Twenty-nine saves for Tampa Bay were made by Andrei Vasilevskiy in his sixth straight start. Lightning coach Jon Cooper proudly said Vasilevskiy kept them alive during the six games.

At 2:30 of the second period, the Red Wings thought Darren Helm scored to make it a one-goal game. But after a review, the officials interrupted, deciding to take away the goal, ruling that Abdelkader interfered with the goalie and Victor Hedman was given a two-minute penalty for hooking Abdelkader on the breakaway. When the officials have made a deliberate decision, they awarded Abdelkader the penalty shot which makes him the first Detroit player to score on one since Valterri Filppula on Dec. 15, 2007. Kucherov, Mike Green, and Gustav Nyquist all had a game-high six shots on goal.

Effects Of The Match

Having a lot of National Hockey League fans, many matches are made available for Bitcoin betting. The match between Lightning and Red Wings is no exception. You could find NHL Ice Hockey betting odds on various Bitcoin sportsbooks. Tampa Bay Lightning’s win could leave a huge effect on future betting odds for the two teams. Nonetheless, the match between the two is a well-fought one and NHL fans and bettors should tune in.