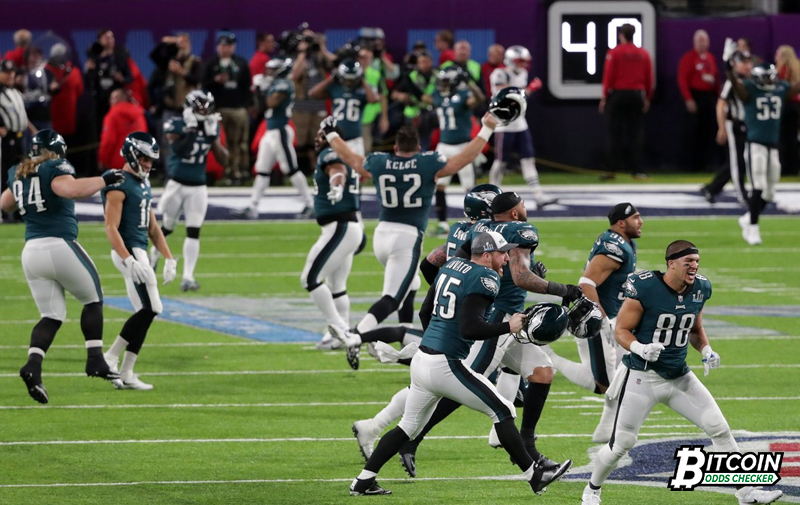 The Philadelphia Eagles completed an amazing and fairy-tale run to claim their first-ever Super Bowl win for the franchise. The underdogs held the Patriots with their gritty defense after a crucial stop in the final two minutes of the fourth quarter, that stopped Tom Brady from attempting a comeback with the score, 41-33.

For bettors, the Eagles are not the only winners. With the many prop and futures bets available, Bitcoin sports betting for Super Bowl LII conceived winners all around the globe. We’ll go through each market line offered by NitrogenSports to shed light on this year’s Super Bowl winning bets.

For you under bettors, you guessed right. Pink sang the anthem in under 2 minutes, clocking a time of 1 minute and 53 seconds. Moreover, Pink didn’t go crazy with her choice of hair color this time, as the singer went on stage flaunting her natural blonde hair.

For the coin toss bettors, if you placed a wager on heads, then you can claim your winnings, as the final NFL coin flip of the season landed heads.

The Eagles showed how much they wanted to win as early as getting the first field goal against the Patriots. They led against the former champions until New England scored their first of the game at the 7-minute mark of the first quarter.

The Super Bowl LII was surprisingly a high-scoring game, ending with a total score of 74. Here are the total team points odds for the Eagles: The Eagles were logged with 21 total points scored, so if you placed a bet for over in totals, you’ve clearly won. Additionally, the new champions were logged with 10.5 first half total point scored, and the Eagles were able to score 22 points at the end of the first half.

Finally, the Super Bowl is a time where the Bitcoin American football odds are most alive but also betting and entertainment jiving together. Most of all, don’t forget that this historical win by the Eagles with a chance to witness an NFL Super Bowl back-to-back win.